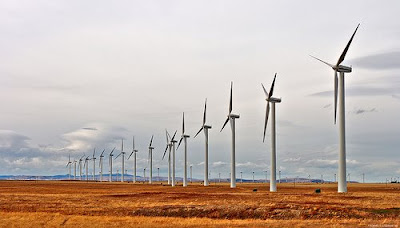 The government officials of major U.S. cities such as San Francisco and New York are pushing for wind turbines as a solution to their city’s energy problems. During the National Clean Energy Summit Michael Bloomberg New York’s Mayor requested expressions of interest. He’s considering all forms of renewable power especially offshore wind, wind turbines positioned on skyscrapers, and various sources of hydropower. Bloomberg stated, “I think it would be a thing of beauty if, when Lady Liberty looks out of the horizon, and she not only welcomes new immigrants, but lights their way with a torch powered by an ocean wind farm.”

Although, his statement was quite poetic many homeowners in the west are against ocean wind farms. The most sought after western coastal property are the ones with magnificent ocean views. Residents who pay excessive amounts of money for their extravagant homes do not want to look out and see giant wind turbines. Offshore wind farms have been terminated and stonewalled due to wealthy homeowners who are determined to keep their oceanic views beautiful.

Is is fair for alternative energy projects to get placed on the back burner because of affluent homeowners?

Most likely New York which has massive amounts low income individuals as residents and a more industrial view will have no problem obtaining the green light for Bloomberg’s ocean generated wind farm dreams. The major flaws with wind turbines is the scenic change in the area, loud noise, and annoying vibration within the unit surroundings.

Companies like Quiet Revolution in the UK are working on correcting the defects current wind turbines posses. Their main objective is to create smaller more efficient turbines to be installed locally on a wider scale. Quiet Revolution’s QR5 wind turbine is specifically designed with one single mobile part reducing noise. It also utilized several S-shaped blades to produce 20-40% more energy than other standard turbines. The QR5 was initially created for local schools, energy developers, and governments. They even have versions of turbines with video screen features and LEDs lodged into the blade. Quiet Revolution has been very busy since the UK is the largest wind resource in Europe. An estimated 40% of UK’s energy can be generated through this method by the year 2050.

As fossil fuel prices increase other alternatives are being considered in America as well. Wind turbine is a hot topic among our government officials. T. Boone Pickens has brought more light to businesses and lawmakers about using wind as our alternative energy to fossil fuel. As the chairman of BP Capital Management Pickens has years of experience in the oil and gas industry. His plan for energy calls for utilization of wind as a major source of energy for the country. New York Mayor Michael Bloomberg and San Francisco’s Mayor Gavin Newsom has a similar vision. Hopefully, companies like Quiet Revolution and others will continue to improve turbine abilities to a point where it is universally acceptable. As a nation we may start to see small wind turbines in our local communities by year 2010.