“Sara Volz, a 17-year-old high school student from Colorado, received top honors and a $100,000 check Tuesday at a science fair for pioneering a technique to dramatically boost oil yields from algae, a crucial step in the economically viable production of biofuel from the plants.

Her technique involves the use of a chemical to artificially select populations of algae cells with high oil content. She did all the work in a makeshift lab under her loft bed in Colorado Springs.”

An expert in Algae Biofuel explains various methods it is being cultivated and processed for biodiesel and ethanol.

The promise of using algal biofuels as a substitute for petroleum has been bandied about for several decades. During that time, the political and commercial appetite for achieving it has waxed and waned with the price of oil and the demands of national security. But today, calls for oil independence and alternative energy sources have placed renewed focus on algae.

To find out how to do it yourself check out the guides here: http://organicmechanic.com/algae-biofuel/

“I used artificial selection to isolate populations of algae cells with high oil content with the idea that they can make these different cell lines to keep on producing lots of oil,” she explains.

Volz added a chemical to her algae cells that that would kill all those with low oil production, leaving only the algae that pumps out oil efficiently.

This experiment also sheds light on there being simple ways to cultivate your own Algae Biofuel! Here is a guide to help every step of the way, from small to large scale production! http://organicmechanic.com/algae-biofuel/

To read the rest of Fast Company’s article: http://www.fastcoexist.com/1681580/this-17-year-old-built-an-algae-biofuel-lab-under-her-bed

These apartments in Germany are 100% self powered by algae fueled bio reactors. Algae panels on the building also provide shade and temperature regulation, as the sunnier it is the thicker the algae grows in the panels.

You could absorb CO2 out of the atmosphere – more CO2 than forests take in! – AND produce nearly cost and carbon free lighting at the same time!!? 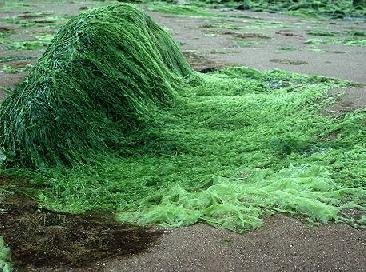 Due to the current “oil crisis” situation more research has been focused on the use of renewable fuels. Researchers have found algae to be a new potential biofuel in their search for fossil fuel replacements. Algae may be the solution we’ve been looking for. This plant-like organism which has throughout time played a major role in our ecosystem can be processed into biocrude and refined to gasoline form. The government is placing focused attention on discovering more alternative sources of biofuels. Their main objective is to replace over hundreds of gallons of gasoline or more by the year 2010.

More than three-quarters of the oxygen in the atmosphere is produced algae and cyanobacteria. Algae which comes in the form of golden, green, brown, red, and flagellates can be found as a single floating organism or large seaweed. It has a reputation of preventing pollution. Algae has been used in wastewater treatment centers, to protect lakes from fertilizer chemicals, as an alternative to toxic dyes, as nutritional supplements, as a superfood, and even in some common cosmetics.

There are several reasons algae is an excellent fuel alternative. Algae has the ability to produce oil naturally. Unlike other sources of biofuels algae does not need to follow the guidelines for a food crop so it can be produced in larger amounts for less. There is no fertilizer or watering requirements either so the process of growing algae is quite simplistic once the strain of algae to reproduce has been perfected. It is believed so far, through experimentation that algae as biodiesel can produce enough automotive fuel to replace the planet’s gasoline usage. Algae can be manufactured at operating oil refineries. This procedure is practiced at companies like LiveFuels and Solix Biofuels. Certain strains of algae that are high in carbohydrates and lacking in oil can be turned into ethanol and leftovers used as animal feed. Nothing has to go wasted when using algae. It can be grown in ponds or in standard laboratories in clear tubes.

Believe it or not algae as an alternative fuel is not a new concept. It was first introduced years ago in the 90’s. Scientists had discovered algae’s potential as a diesel fuel replacement but due to the low gas prices at the time the idea seemed unnecessary and the program called NREL was eliminated. Fortunately, the oil crisis has brought attention back on algae. According to scientist Eric Jarvis the algae research program NREL which was terminated in 1996 will restart their research this year in hope of being able to use algae as the new fuel.