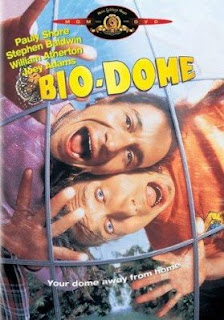 Released in 1996, Bio-Dome attempted to bring an eco-conscious attitude to the forefront of the burned out minds of teenage boys everywhere through use of crass humor and wild fantasy (such as the fact that not one but two attractive and intelligent women could actually be interested in the lead characters Bud and Doyle). If there was not an environmental back plot this flick would be classified, like many other movies starring Pauly Shore or Stephen Baldwin, as a “stoner” movie but because there is an effort to include a fantastic moral message, the bad acting and terrible script take a back seat in this review.

The plot is simple — A couple of unattractive, lame guys with a generally cavalier attitude about the planet miraculously manage to date environmentally stringent and beautiful women then through a course of predictably moronic twists, somehow become locked inside, destroy and subsequently end up saving an entire, working eco-system.

Does this concept sound a bit far fetched? Remove the idiot character factor and that leaves us with a sealed, working eco-system. This notion is one that dates back to the early 1800’s when a British physician discovered that plants could grow under glass. It would be fair to assume that Nathaniel Ward would be proud to learn his findings were used as fodder for a comedy which is the basis for why this movie will get a positive review here.

Some concepts discussed in the movie are recycling, land clean up (litter is discussed several times) and an appreciation for Earth Day. The movie is not a motion picture epic but holds a slight bit of predictable humor while it promotes bettering the environment. That is a notion we should all support so I give this movie 2 out of five “green” leaves.